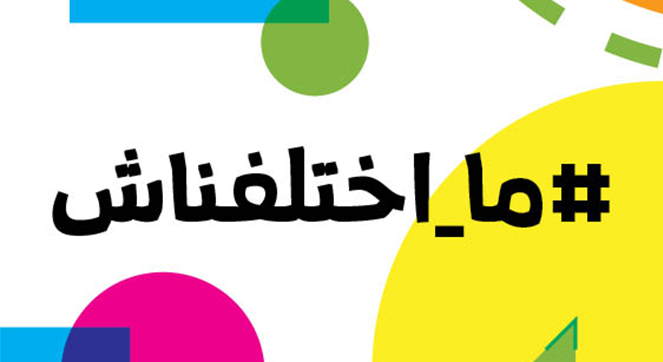 Diverse expressions of sexuality and gender are not an excuse for any form of violence. Marginalization, isolation, and bullying are only a few of the social forms of violence perpetrated against LGBTQ individuals and groups. It is time we stand firm against these harmful social behaviors and actively refuse  to lend them legitimacy.

Our campaign addresses the different social forms of violence against LGBTQ individuals and groups in Palestine through three short videos, a series of posters, and new educational material, all of which will appear on the campaign’s new mini-site.

In the first video, a conversation between three activists presents local and universal misconceptions and myths that legitimize violence against LGBT in Palestine. These popular myths, which have no basis in science, create a social and cultural atmosphere that blames LGBTQ individuals, groups, and organizations for the violence committed against them, and demonizes LGBTQ people to legitimize their isolation and marginalization.

The second video presents everyday cruel and violent incidents and experiences that LGBTQ Palestinians repeatedly face at school and in their families, as well as in public spaces. Some of these experiences include street violence, school bullying, social isolation, distrust of family members and professionals, the inability to share daily life and feelings. These daily experiences are part of t a social and cultural atmosphere that encourages and legitimizes violence against any person (not only LGBTQs) who society sees as different. The video is based on some of our members and friends real stories and experiences, but cannot represent the amount and variety of violent forms society practices on LGBTQs, some of which are much more severe and even life-threatening.

The third video - this time using animation - sheds light on verbal violence and our society’s shockingly negative vocabulary about these topics. The amount of violence we use when we talk about LGBTQ issues in Palestine is difficult to track,  from old and new sayings, to “jokes” we use on a daily basis among our friends and family members, all without consideration for the effect it has on LGBTQ individuals.

This campaigns does not seek to promote LGBTQs in Palestine as victims. LGBTQs in Palestine have the power, agency, vision, and energy to change our lives and our surroundings. We are using our experiences so together we can  better understand the endless impact of social violence on different individuals and groups, and so we can be more aware of our complicity with it. We share a collective responsibility for the continuation of this violent atmosphere , just as we share a collective responsibility and, as this campaign hopes to promote, an opportunity to stand against it.

Changing attitudes it is a lifelong mission - especially since sexual and gender diversity topics are widely considered socially, culturally, and politically “sensitive.”  Yet, based in our years of experience and activism in our society, we recognize that it is now time that for  all of us to firmly and openly stand against these forms of violence in our families, schools, neighborhoods and streets, organizations, and social and political movements.

This campaign is a partnership between alQaws for Sexual and Gender Diversity and 7amleh: the Arab Center for Social Media Advancement. After months of discussions about the scope and goal of this campaign, we determined that shedding the light on violence against LGBTQ in Palestine is a priority. We decided our campaign would aim to challenge the broader social legitimacy of this violence that different power structures, professional groups, and of course families are complicit with. While we can’t address all of the related forms of violence against LGBTQs, we decided to focus on the daily and repetitive forms of violence (sometimes called micro-aggressions) that  create a complex trauma or that LGBTQs normalize in unhealthy ways.

To chose the themes we would focus on, we organized sessions with more than 50 LGBTQ from various places in Palestine and asked them about their experiences with social violence. From the raw transcribed data we collected, we decided to produce three short videos addressing different aspects or layers of violence against LGBTQs. The script was written using these stories and experiences, to be performed by alQaws activists and friends in conversation in the first two videos. We shared the first cut of the videos with 4 different focus groups from Jerusalem, Ramallah, and Nazareth, reaching more than 70 people. The focus groups’ primary goal was to assess the clarity of the message and the ability of the videos to engage different audiences. The last versions you see here are the final products that we adjusted according to the positive and productive feedback we received.

We hope the videos and other materials of this campaign will allow us to raise a social discussion about sexual and gender diversity in Palestine with LGBTQ stories in the center.  By directly calling for  our society to take responsibility to end all forms of violence against LGBTQ people, we demonstrate that building an inclusive and open society requires a collective effort.

alQaws for Sexual & Gender Diversity in Palestinian Society: is an organization building the LGBTQ community in Palestine. They create safe spaces for LGBTQ Palestinians, run a professional advocacy group to support Palestinian therapists in integrating LGBTQ issues into therapy, and run a national support hotline. alQaws also advocates to change public discourse on gender and sexuality in Palestine and works with LGBTQ Palestinian youth, providing opportunities for advocacy, education, and community-building.

This project is supported by The Euro-Mediterranean Foundation of Support to Human Rights Defenders (EMHRF).